Thoracic trauma by black caiman's bite in the Amazon region

Alligator attacks are rare, being mostly by accidental causes, for lack of care in regions where the presence of these animals is confirmed or by provocation of them. There are few reports of accidents by these animals. The reported species hereafter is the Melanosuchus niger from the Amazon rainforest. The patient aged 32 years, coming from the countryside of Amazonas, was admitted to the emergency room 3 days after the accident with black caiman's bite. Alligator attacks of the species M. niger are very severe, due to its size around 6 m of length and overwhelming strength, being capable to cause extensive and deep lacerations with its bite. Cases like this are not easy to conduct. Since the injury was on an atypical place, the severity of the symptoms was increased, leading to dyspnea and huge blood loss.

Alligator attacks are rare, even in the Amazon region, being mostly by accidental causes, for lack of care in regions where the presence of these animals is confirmed or by provocation of them. We must consider that the Amazon region has two species of different genera that are passing through an intense moment of population recovering for the last two decades after a period of predatory exploitation, and they are still the most abundant crocodilians on the region being them the spectacled caiman (Caiman crocodilus) and the black caiman (Melanosuchus niger).[1] There are few reports of accidents by these animals, most related to smaller species, such as Caiman yacare (Yacare caiman) and Caiman latirostris (broad-snouted caiman). However, the reported species hereafter is the M. niger, or the black caiman, from the Amazon rainforest, it presents a large size compared to the others, and it attacks humans for predation, not being considered just accidents as with other species.[2],[3] Another important factor to be quoted is the seasonal period of alligator appearance, mostly present on low water level periods of the river, facilitating attacks on the surface; moreover, it is a common period of animals' egg's incubation. At this time of year, there are many other species that feed on these eggs, which increase the rate of aggressive alligators on the surroundings.[4]


The patient, a 32-year-old man, coming from the countryside of Amazonas, was admitted to the emergency room 3 days after the accident with black caiman's bite (M. niger). According to the reports, the victim was fishing in a river near his city on a canoe, followed by his wife on another canoe, when the animal with approximately 5 m length got on the patient's boat, attacking his chest, releasing him only because his wife attacked the alligator with wood pieces. In his admission, he appeared to be slightly dyspneic and has chest pain, respiratory rate of 22 rpm, heartbeat of 106, and normal values of blood pressure.

The physical examination showed extensive lacerations at the left hemithorax [Figure 1] and [Figure 2], with loss of soft parts at the thoracic wall, rib fractures, lung parenchyma exposure, and muscular tissue wounds. The first step was inserted a chest drain of 28 French inside a wound to drain a severe purulent fluid. The leukogram showed a raise of leukocytes rate (20,451).

The patient was immediately forwarded to surgery center, where was performed a left anterolateral thoracotomy showing pleural adhesions at the chest wall, pleural cavity cleaning, partial pulmonary decortication, cleaning and debridement of the thoracic wall muscles, partial excision of the ribs (ribs 7/8/9), and a closed chest drain with water seal, associated with collagenase dressing. After 24 h of evolution at intensive care, the vital signals were stable, blood pressure levels were 90/50 mmHg, cardiac frequency: 72 bpm, saturation: 96%, and temperature: 36.5°C, accepting oral diet, without pulmonary symptoms, but with chest tube inserted. Thorax radiography showed opacity at left lung, more intense between superior and inferior lobe [Figure 3]. At the 3rd day after the surgery, the levels of blood in chest drain had an important decrease but still with bubbles and serous liquid, without smell. At 10 day of postoperatory, thorax radiography was solicited, with a residual opacification between superior and inferior lung lobe [Figure 4]. After 11 days, the drainage tube had no bubbles or serous liquid and was removed after this.

He remained hospitalized for 15 days with parenteral antibiotic therapy (6 days of cefepime +8 days of meropenem) because of extensive and unspecific microbiota of alligator jaws. He evolved well at postoperative, with radiological and drainage volume control, withdrawn at the 14th day after surgery and decrease of leukocytes levels. Received discharge clinically well with residual pulmonary opacification at the left hemithorax.


Alligator attacks of the species M. niger are very severe, due to its size around 6 m of length and overwhelming strength, being capable to cause extensive and deep lacerations with its bite, lethal against children and small-sized people. The main complications due an attack of this kind are tissue lesions that depending on the affected region may compromise functions or losing limbs; blood loss, due the wound depth, hits blood vessels, leading to hypovolemic shock in cases, like the one related above; and infection, due the bacterial flora present in the alligator's mouth.[5],[6],[7] The most attacked anatomic parts are the inferior limbs, being able to lead to amputation if the initial medical care takes too long.

The early debridement and the hypovolemic and infectious states stabilization are the initial goals on this situation because they are the main causes of death.[8] It is important to mention that great thoracic traumas are very complicated to handle due the vital organs and easily traumatized when submitted to high strength, like an alligator bite, that can be ranged from 217 to 13,172 N, leading to an increase of the mortality in similar cases, which tends to be the focus of researches in the next years.[9],[10]

Acknowledging few published reports by trustful sources, a case like the reported above fits in every way like a hard situation to care. Since the injury was on an atypical place (the thorax), the severity of the symptoms was increased, leading to dyspnea and huge blood loss. Added to this, there is the difficulty of the Amazon region, mostly on the riverside communities, which does not have a good emergency support in cases of this magnitude, needing to go to a specialized center, most of the time in Manaus to receive a proper care. So, considering infectious factors, prognosis was poor due to the late beginning of antibiotics and surgical cleaning of the wounds (on the third day after trauma), what makes this case even more relevant for its favorable outcome.

Cardiac herniation into left pleural space and huge subcutaneous emphysemaBruno José da Costa MedeirosSurgery Institute of Amazonas' State, Manaus, Amazonas, Brazil
A patient male, 45 years of age was brought to our trauma hospital after fall from a light pole (7 m of high), presenting shortness of breath and a huge subcutaneous emphysema. After the first assessment (oxygen supply and analgesia), the patient got better. He was transferred to imaging department; a computed tomography scan was performed. A huge subcutaneous emphysema surrounding the entire chest [Figure 1], a cardiac herniation into left pleural space [Figure 2] and a bilateral pneumothorax and right hemothorax were observed. The patient underwent bilateral blunt chest tube thoracostomy after that was transferred to cardiothoracic unit. He recovered well from the thoracotomy executed by cardiothoracic team.Declaration of patient consentThe authors certify that they have obtained all appropriate patient consent forms. In the form the patient(s) has/have given his/her/their consent for his/her/their images and other clinical information to be reported in the journal. The patients understand that their names and initials will not be published and due efforts will be made to conceal their identity, but anonymity cannot be guaranteed.
Αναρτήθηκε από Alexandros G. Sfakianakis στις 11:50 μ.μ. Δεν υπάρχουν σχόλια: 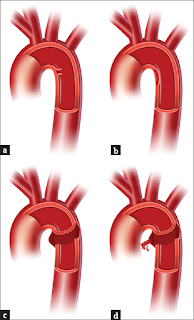 Blunt thoracic aortic injury (BTAI) is a significant problem in cardiothoracic trauma. It is a leading cause of prehospital death from high energy motor vehicle crashes. Injuries can be classified into one of four grades: grade I – intimal tear; grade II – intra-mural hematoma; grade III – pseudoaneurysm and grade IV – uncontained rupture. Clinical symptoms and signs are often limited, especially in minor injury grades. Left sided hemothorax and a widened mediastinum on chest radiography are concerning features suggestive of BTAI. Computed scanning is now an indispensable tool used to evaluate patients and has largely replaced aortography. The aim of management is to control hemorrhage (if present) and to reduce the risk of delayed aortic rupture. Patients with pseudoaneurysm can undergo semi-elective repair, provided blood pressure can be controlled which is critical to preventing lesion progression and rupture. Patients presenting with an uncontained rupture require emergent repair. The preferred method of intervention is no longer operative repair (with bypass for distal perfusion), but thoracic endovascular aneurysm repair (TEVAR). An endovascular approach is associated with a lower morality and lower rates of spinal cord ischemia. The aim of this review is present the history of management and the supporting evidence along with an overview of current practice from a busy US trauma center.
http://www.jctt.org/currentissue.asp?sabs=y
Αναρτήθηκε από Alexandros G. Sfakianakis στις 11:34 μ.μ. Δεν υπάρχουν σχόλια:

the care of patients with rib fractures

the care of patients with rib fractures p. 5
Helen Ingoe, Catriona Mcdaid, William Eardley, Amar Rangan, Catherine Hewitt
DOI:10.4103/jctt.jctt_1_18
Context: Increasing use of rib fracture fixation, despite lack of robust evidence of its effectiveness, has led to calls for large well-designed randomized controlled trials (RCTs). Aims: The aim of this survey is to ascertain the current clinical care of patients with rib fractures, identify pathways to aid patient selection, and establish whether clinicians would be willing to randomize patients into a surgical trial. Subjects and Methods: An electronic survey was distributed to trauma unit (TU) and major trauma center (MTC) leads were identified by the trauma network managers in England and Wales. Institutional ethical approval granted. Results: Most national health service (NHS) trusts have an emergency department chest trauma protocol (n = 34, 81%); seven (88%) MTCs provide a rib fracture surgery service. General surgery is the lead specialty in TUs (TUs: n = 26, 77% vs. MTCs: n = 2, 25%) and thoracic surgery in MTCs (n = 26, 77% vs. n = 3, 38%). When intubation is required, intensive care medicine leads this care (n = 19, 56% vs. n = 3, 38%). Specialist physiotherapy (n = 17, 41%) and rehabilitation consultants (n = 7, 17%) were available in some hospitals. Clinicians reported that they would be willing to take part or identify patients for an RCT of flail chest fixation (n = 34, 81%) and multiple rib fracture fixation (n = 35, 83%). Conclusions: Care of rib fracture patients involves both MTCs and TUs with variation in care protocols, referral pathways, lead specialties, and rehabilitation services. Several challenges are highlighted that would need consideration in the design and delivery of a clinical trial of surgical fixation of rib fractures. A feasibility trial is required in the first instance.
http://www.jctt.org/currentissue.asp?sabs=y
Αναρτήθηκε από Alexandros G. Sfakianakis στις 11:32 μ.μ. Δεν υπάρχουν σχόλια:

Pre- and postadenotonsillectomy nocturnal enuresis in children with adenotonsillar hypertrophy